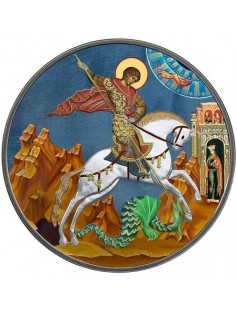 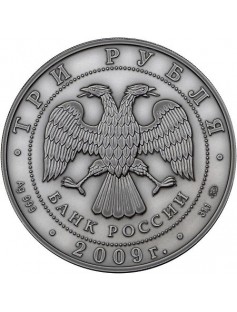 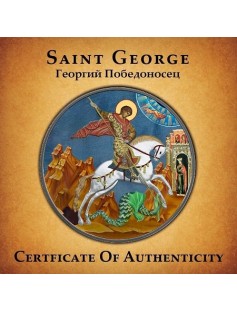 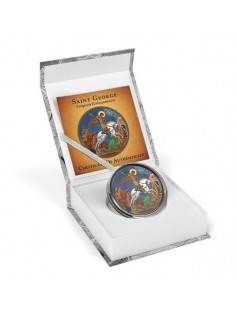 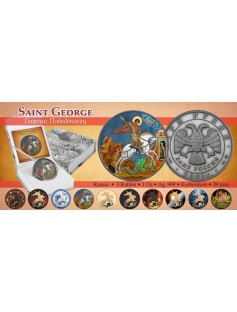 Saint George  according to legend, was a Roman soldier of Greek origin and officer in the Guard of Roman emperor Diocletian, who was sentenced to death for refusing to recant his Christian faith. As a Christian martyr, he later became one of the most venerated saints in Christianity, and was especially venerated by the Crusaders.

THE LEGEND OF ST. GEORGE AND THE DRAGON
Once upon a time, when it was long, long ago, there was a good king in Capadocia, and he had a little daughter, Sabra, and he loved her a lot because Sabra was sweet, intelligent and kind.
But one day a terrible dragon came to his kingdom! It was really big, he breathed fire and he was always hungry.
It destroyed the fields and the kingdom’s food. It also killed the animals to eat them. But he was always hungry and  he decided to wait outside the city to get more food from the people.
The king sent his nobles to ask the dragon to leave, but he didn’t; and this is the message the dragon sent to the king: “Each morning send me one of the prettiest little girls in the whole kingdom and tie her to the oak tree, so I can eat her! If you don’t I will not let you go back to the fields and you won’t have more food!”.
Everyone was sad. The mothers were scared that the dragon would eat their daughters. But Sabra was still happy and laughed.
"Father," she said, "let me be the first little girl to go. If the dragon has your little princess he will not eat any other child. Let me go, father."
Then the people came to the palace, asking the king not to send Sabra, because they all loved her a lot, but Sabra said: "I will go to the dragon."
Poor, sweet little Sabra! They carried her out to the river bank and tied her to a tree for the dragon. Then they went very sadly back to the castle.
But luckily, there was a knight whose name was George who was very brave and knew how to fight many enemies. He was riding his horse in the field and he saw the princess and the dragon. The dragon was very scary, but the knight was very brave and strong. He took a very big pine cone and put it into his spear. He rode towards the dragon and put it into his mouth, so the dragon could not burn him.
Then the knight killed the dragon with his spear, and he untied the little princess. He lifted her to his horse and carried her home to her father.
Oh, everyone was happy in the kingdom! The people threw flowers to the knight’s feet. The old king held little Sabra close to his heart, and she put her arms about his neck and kissed him again and again. And the king said the knight should be called St. George, and he gave him gold cross to wear upon his breast.